After a fantastic opening night, Theatre People spoke to two of the stars and the director of ASPECT’s production of Blood Brothers. Snatching a quick few minutes before the beginning of their second performance, Jane Court (director), Phil Lam and Ashley Cooper (playing the title roles of the brothers) took a few minutes to answer our questions.


Why did you want to do this show?

Ashley: You really have to flex your acting muscles to convincingly play a 7 year old, a 14 year old, and an 18 year old who feels 45. Challenges are my life!

Phil: I'm 30 and have really just started in amateur theatre a few years ago. I was cast as Morded in MLOC's Camelot in 2011 and played Link Larkin in ASPECT's Hairspray in 2013.

Ashley: I just finished playing Trevor Greydon in Thoroughly Modern Millie, the Lead Stormtrooper in The Producers. The Big Bopper in The Buddy Holly Story, The Pharaoh in Joseph and the Amazing Technicolor Dream Coat also round out some of the more interesting roles in the last few years.

Jane: I have recently enjoyed the chance to direct The Witches of Eastwick and The Producers.

What was your introduction to Blood Brothers?

Phil: Friends of mine recommended that I audition for Blood Brothers after I finished Hairspray, as I knew nothing about the show… Thank goodness they did because it has become one of my favourite shows and I am honoured to be a part of it! 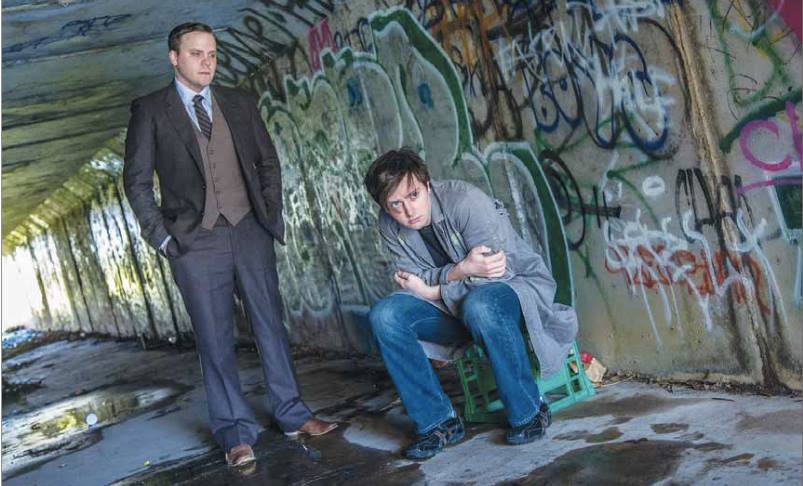 Pictured above: Phil Lam and Ash Cooper in a promotional image for Blood Brothers,

How is it to work with the other cast and creatives?

Phil: The cast and crew are simply amazing! It makes it very easy to perform along side such a talented group of people.

Ashley: Phil (my on-stage brother) and I have spent a long time outside of rehearsals getting to know each other and becoming good friends. This translates to proper chemistry on stage, not just two people performing their lines.

What is your favourite part of the show?

Phil: My favourite part of the show would have to be when Mickey comes to my house to play and Mrs Lyons sends him off. Eddie packs a tantrum and uses his newly discovered swear words to tell her how he feels.

Ashley: I think my favourite part is changing from a carefree boy, getting married with his whole life ahead of him, then within a song, to a  troubled man with no job and a kid on the way. It’s one of the defining moments that shows life isn’t fair for everyone, and sometimes it’s rough to judge someone by a single period of their life.

Is there anything special about your show that hasn't been seen before?

Ashley: The opening. We have a slight twist on the traditional approach, showing a slightly different perspective of the last scene. No one I know has ever seen it, and if they’re familiar with the story, it’s a wonderful touch.

Jane: For this production we have given it a more traditional feel than is usual for Blood Brothers. A larger than normal cast gives a more natural crowded feel of north country English cities such as Liverpool and using dance as a metaphor of the dire omens and chaos surrounding the characters.

Ashley: I’d certainly like to thank both the production team and the Aspect committee for being so wonderful and accommodating of me over the last few months. I’ve been able to put my own stamp on the character, and the characters stamp on scenes all thanks to these wonderful people. Thank you so much!

Jane: I am so thrilled to be directing my first ‘serious’ show with ASPECT, and I am so proud of the company for taking a risk on a less well known show!

Performance and ticketing information for ASPECTS's production of Blood Brothers can be found by following this link.