Amanda Harrison gets up close and reasonably personal

Amanda Harrison has an enviable list of theatre credits. Making her professional debut playing Jenny in Aspects of Love, Harrison quickly established herself as one of Australia's finest musical theatre talents with roles in Sunset Boulevard (Betty,) Les Miserables (Eponine understudy,) Miss Saigon (Ellen,) The Boy From Oz (Liza,) and We Will Rock You, for which she was awarded the 2004 Helpmann Award for Best Supporting Actress in a Musical for her portrayal of Oz … and that's just to name a few of the shows.

Harrison is probably best known for originating the role of Elphaba in the Australian production of WICKED. For this role she was nominated for Green Room, Helpmann and Sydney Theatre Awards for Best Leading Actress in a Musical. In 2012 Harrison created the role of Paula in the World Premiere of An Officer And A Gentleman. Harrison has performed on London's West End, in New York's Carnegie Hall and in more recent times performed in the Do You Hear The People Sing? concert tour alongside Lea Salonga, Michael Ball and David Harris.

Indeed, it is a very impressive list of credits that spans more than twenty years. Harrison's latest event is her own cabaret show, titled Up Close and Reasonably Personal. The idea for this show first came about when she was invited to perform on the Gold Coast and was asked, “Do you have a show?” She quickly contacted talented writer and friend, James Miller (Hatpin, Love Bites) and asked for his assistance.

It's been 7 years since Harrison has last performed a cabaret show in Melbourne – when she was pregnant with her first child – and Harrison figures there has been a lot happen since that time. Harrison now has two children aged 7 and 3, and admits that having children has changed her life.

Harrison hopes her audience will leave the show knowing a little more about her as a person rather than as the characters she plays. Harrison will share insights into her life as a wife, mother and diva. This includes her time as Elphaba in WICKED and why she chose to leave the show when she did, acknowledging that each time she talks about this time in her life is somewhat cathartic and healing. However, ultimately it is a very fun and entertaining show that will leave audiences smiling. In fact, Harrison describes the show as being like a stand up comedy routine performed through song.

Harrison didn't go to the theatre as a child and it had never really occurred to her that she could sing and earn money for a job. She was a student who worked hard through high school to either gain entrance into a university course or get a “good job” because it was simply the done thing. If she hadn't landed the role of Jenny in Aspects of Love Harrison feels she probably would've floundered around trying to work out what she wanted to do with her life.

Harrison's love of musical theatre started with high school musicals. She was “that” student who always scored the lead role. Harrison did take dancing lessons right through to her teen years, but when her first role was a more dramatic one, without dancing, she pretty much dumped her dancing shoes. She does wonder what would have happened if she'd landed a role in something like CATS instead!

Growing up, Harrison could always sing and feels she probably learnt by imitation. She has always enjoyed listening to the divas with massive voices like Barbara Streisand and Bernadette Peters. There's that word again: diva. Harrison's twitter account describes her as a wife, mother, diva. I asked Harrison about that word – is she really a diva? (The woman sitting opposite me in a quiet cafe in suburban Melbourne does not seem to a be a “diva.”) Harrison explains that she is a sort of a diva. In terms of her career, she certainly gets the big soaring songs to belt out like a diva, but she's not the sort of person to cause others grief in the way a true diva would. However, Harrison does admit she likes to get what she wants, is outspoken and doesn't hold back … she just manages to do this in a polite and respectful way. So overall, she feels she embodies a diva in all the positive ways.

These days, Harrison is busy doing concerts, cabaret shows and voice over work, including voicing characters on the animated television series Get Ace. She is aware she is getting to an age (let's just say she is in her late 30s) where she is too old to play the ingenue and therefore musical theatre roles can be limited. Harrison has also commenced teaching singing and has a growing number of students. With over twenty years of experience, Harrison has realised she has a wealth of information to share.

The other thing that keeps Harrison busy these days is social media … and in particular Twitter. She admits that during her WICKED days she was somewhat frightened by social media and tended to be "drawn like a moth to a flame" to all the forum pages and illegal Youtube clips where she would read harsh comments and criticisms of her performances or why she was absent. At the time, she says it was soul destroying. Years later, Harrison is now a huge fan of social media (and even the occasional posting of illegal backstage video footage.) For Harrison, Twitter is now a forum for comedy. She likes to take a thought, process it and then write something that will say what she really thinks without being offensive, not being afraid to be open and express what she thinks and where she stands on issues. 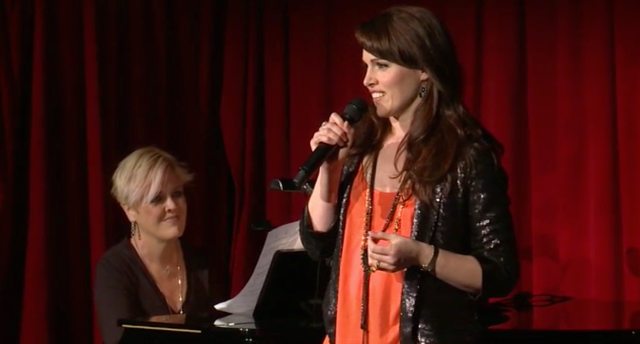 Accompanying Harrison in Up Close and Reasonably Personal will be the very talented pianist Bev Kennedy, who is much more than simply the accompanist, but an integral part of the show. The show is not entirely focused around musical theatre, but instead allows Harrison to perform songs that mean something to her personally. Her current favourite song to perform is Let It Go from the movie Frozen. (Hearing Harrison perform that song is reason enough to buy a ticket to her show!)

Up Close and Reasonably Personal is a candid evening of song and conversation, in the intimate space of Melbourne's Chapel Off Chapel. Harrison hopes the audience will laugh out loud, enjoy the music, enjoy her voice and just have a really fun night as they get to know her as not only as Amanda Harrison the performer, but also as a wife, mother and diva. No doubt there will be plenty of Twitter action after the show.

Seating: General Admission. Please make sure you arrive a minimum of 15 minutes prior to the performance start time. There is a lockout policy for this show.

Windmill Bets on Guys and Dolls

Daniel Humphris Has No Doubt