‘ALADDIN AND HIS WONDROUS LAMP’ MODERN MUSICAL
PANTO IS COMING TO AUSTRALIA IN 2015.

Sydney, October 19, 2014 – Bonnie Lythgoe Productions are proud to announce today, the Australian Premiere launch of Aladdin and his Wondrous Lamp panto at the State Theatre in Sydney, July 2015.

Returning from this year’s hugely successful and critically acclaimed inaugural production of Snow White – Winter Family Musical in Sydney, director Bonnie Lythgoe (So You Think You Can Dance Australia) will bring an updated musical version of the classic Arabian Nights tale to Australian audiences.

In the style of a traditional British family panto, Aladdin and his Wondrous Lamp is a singing, swinging and soaring spectacular adventure that features family friendly comedy, magic and today’s music which will appeal to everyone from the ages of 4 to 104!

Ms Lythgoe said Australian audiences can expect new characters and even more celebrities as well as a few surprises with a change in the weather during the show guaranteed. 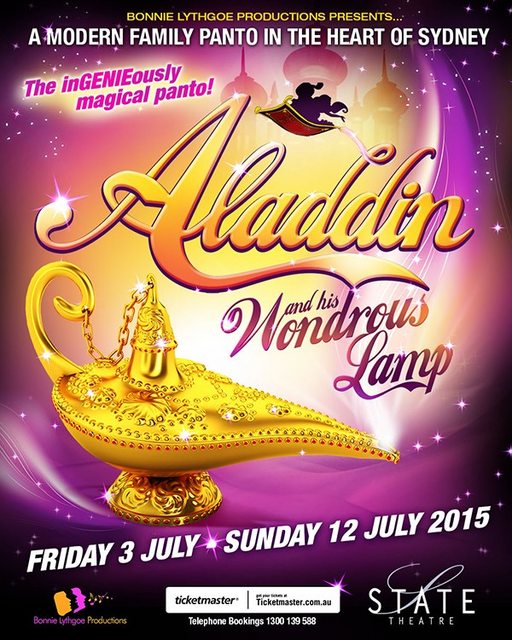 “I am over the moon to be bringing panto back to Australia because I never thought we would have this overwhelming feeling about panto here. One of my real loves is the subject Aladdin which I believe is the perfect show to bring down under” says Lythgoe.

Bonnie has been staging pantos in the USA with huge success for a number of years. She has already produced Snow White, Aladdin (US) and her latest production, Sleeping Beauty and her Winter Knight will premiere at the Pasadena Playhouse in LA from December 10, 2014.

Well known for her creativity and involvement in global television hits “American Idol” and “So You Think You Can Dance,” Bonnie is dedicated to bringing affordable theatre to families across Australia through fun, musical theatre the whole family can enjoy.

Bonnie Lythgoe will soon be showcasing her producing and directing skills once again whilst she spends the next month in Australia casting for the production.

We can expect to see a stellar line up of local and international celebrities in what will be a star studded Australian cast for Aladdin and his Wondrous Lamp next year.

Aladdin and his Wondrous Lamp will be held at the State Theatre in Sydney with performances running from Friday, 4 July through until and including Sunday, 12 July 2015.

Tickets for will go on sale to the public on Monday, 17 November 2014 throughTicketmaster.com.au.

For further information about Aladdin and his Wondrous Lamp please visit www.bonnielythgoe.com

THE KING AND I RETURNS TO AUSTRALIA

Gary Sweet joins the cast of Muriel’s Wedding The Musical