When it comes to stories pertaining to sexual orientation and queer identity, perhaps one of the most famous is that of the real life events surrounding Harvey Milk, the first openly gay man elected to public office in America. Shot and killed in 1978, to the devastation of the gay movement in a time of social change, his life and death still weighs heavily in the minds of many. The Melbourne Gay and Lesbian Chorus have combined their talents with a passionate creative team, and are staging an ambitious Australian premiere of the opera based on his life, hoping to bring about new discussion “as the call for equal rights in Australia and around the world grows louder.”

Theatre People spoke to Cameron Lukey, the director of Harvey Milk, and learned that a big reason for him choosing to stage this show is that he believes gay representation in the media we consume is incredibly important.

“A lot of media now has (LGBT+) characters that I relate to, especially in recent television programming. Australian based opera companies stick predominantly to classics, which are wonderful, and it’s rare to see an opera in Australia about the world we live in right now. What Harvey had to say is still relevant today, and this opera is such a great way to remember his contribution to the gay community. He was a fan of opera and lived a dramatic life worthy of an operatic story – it’s fantastic to be able to begin a dialogue, especially working with the Melbourne Gay and Lesbian Chorus, a group of artists who owe much of where they are now to the men and women (like Harvey) who have come before." 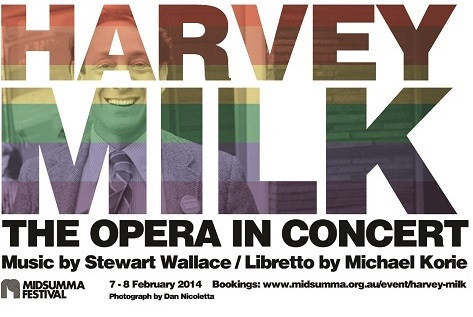 Above: A promotional image for this presentation of Harvey Milk.

“I lived in San Francisco for 13 years and conducted the City’s 25th and 30th anniversary commemorations of Harvey’s death. Having met and known many of the people depicted in the opera, it’s a full circle moment for me to be able to bring this story home.”

Dr. McGuire spoke to Theatre People about her hopes that the Harvey Milk opera would resonate with Australian audiences the same way it has connected to audiences in America, and her wishes to bring the show to other Australian states.

“I really hope that Australian audiences love our presentation of this opera… I find it interesting, growing up in Australia I had no idea who Harvey Milk was, or what he had done for our (the LGBT+) community. In San Francisco, there is a holiday dedicated to Harvey, and he is very much part of the city’s history. Depending on how the Melbourne run develops, we have some plans to take this show further in Australia – we have to work to create visibility of gay and lesbian characters in media, and any piece of theatre that shows gay and lesbian characters and our history in a positive light is literally a life saver. One of the highest rates of suicide these days is in kids who are questioning their sexuality and are bullied for it, so if telling Harvey’s story shows people that there are gay heroes out there, and if one person sees this opera and is positively affected by it, I will be happy.”

Mr. Lukey told Theatre People that with music by Stewart Wallace and libretto by Michael Korie, Melbourne’s semi-staged production of Harvey Milk will feature a scaled down orchestra, with the massive chorus of fifty and five principal performers accompanied by a pianist and percussion.

“We have had a large amount of interest from performers wanting to be a part of this production. Not only is this show a way in which queer performers can be involved in telling their own stories, but this show is also affording the opportunity to be in something previously unseen in Australia. A lot of artists in Australia don’t get the chance to try a piece of new work, so this has been an exciting project for a variety of reasons."

Michele Bauer, the executive producer for Harvey Milk, has been looking in on rehearsals and tells us that she is very optimistic about the production and the message it raises.

“Our principal singers are utterly fantastic, and so far our chorus have created a beautiful sound. It is wonderful to have so many people invested in this opera – it is important to continue to tell stories like that of Harvey Milk, and talk about the issues raised. Although the LGBT+ community has come a long way since Harvey's death, there is still a long way to go. Not telling a broad segment of our societies stories means that we push minorities to the side of public discussion, and the more we tell stories equally the more cohesion we create.”

“(The Melbourne Gay and Lesbian Chorus’) roots go back to the San Francisco Gay Men’s Chorus [SFGMC], the city where Harvey made his mark,” says music director Dr. Kathleen McGuire. “After my brother Lawrence and I heard an SFGMC album for the first time at a party, Lawrence was inspired to start a mixed choir here in Melbourne to help galvanise our community, which at the time was being splintered by the effects of AIDS/HIV. MGLC celebrates its 25th anniversary in 2015 and we are deeply honoured to be part of this momentous opera presentation.”

Harvey Milk the Opera will be presented as part of Melbourne's Midsumma Festival on the 7th and 8th of February, with tickets to be found at this link.

Ever Been Tempted To Stand Up?